Finally getting caught up on writing about this trip I took last fall. I’d been wanting to visit Italy forever. My roommate in college had lived near Naples for two years as a kid when his mom was serving in the Army and had regaled me with stories of the late-night Italian culture. As an endurance athlete, I’ve always been a fan of carb-heavy Italian food. My sister visited the Cinque Terre in 2015 and I was blown away by the photos she took there.

“Have you ever traveled solo? At least once in your life, everyone should,” my friend, Lauren, said to me over beers at Kells Irish Pub in Portland one night. My initial reaction was, “absolutely not.” I’d always traveled internationally with other people, whether they were coworkers, family, friends, significant others. I was certain that, if left to my own devices, I’d inevitably fuck up, pick the wrong train, and end up super lost surrounded by people who didn’t speak my language.

After marinating on it for a month, though, the idea seemed more and more appealing. I liked the idea of having the flexibility to see what I wanted to see, read tons of books, and take a million photos without being concerned with a travel companion getting impatient.

There’s always a tradeoff on a trip between seeing all the things and relaxing. You might maximize exploration, but totally burn yourself out. Conversely, you might maximize relaxing but miss out on new experiences.

I optimized for the middle ground. I decided to set up “base camps” in 3 different locations, which would give me about 5 days at each. This would give me the flexibility to take rest days as needed, take day trips to nearby sights, be able to settle in a little, and enjoy the trip without burning myself out.

My base camps were Rome, Florence, and Riomaggiore, with a final night in Rome before I flew back out. 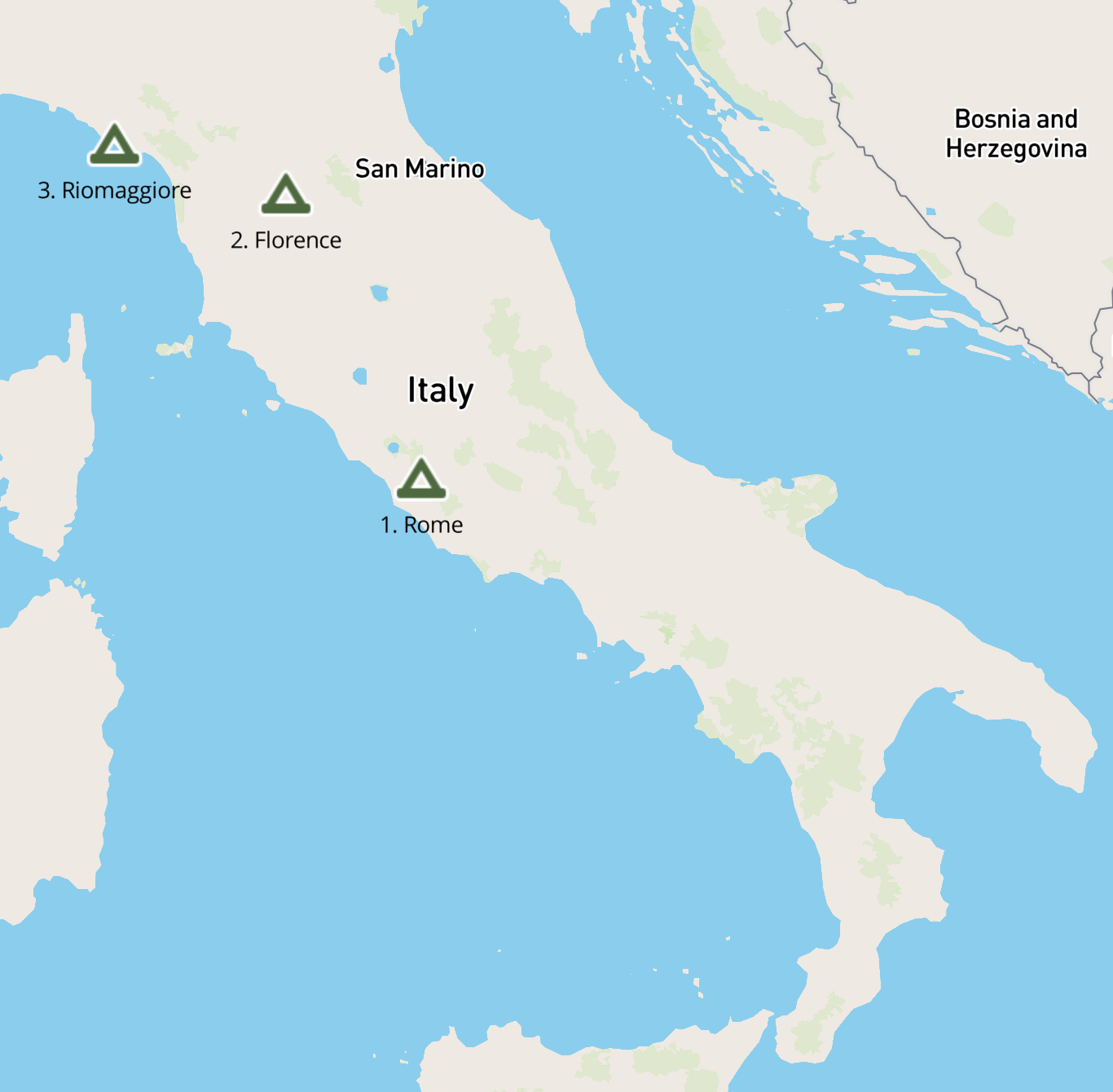 Here we go. After a thankfully restful night of sleep, I spent the first half of the day packing. I made a spreadsheet of everything I needed and checked it off as it went into the suitcase. This turned out to be an effective remedy for my tendency to constantly worry that I’d forgotten something. I caught a Lyft to the airport, breezed through security with my TSA Precheck, and killed the 90 minutes before my 1:18 pm flight watching reruns of Star Trek TNG and eating sushi.

The initial leg to Amsterdam went smoothly. The next one, in Lisbon, had a short layover. I was glad I’d worn running shoes as I booked it to the gate. I arrived in Rome around 2 pm local time. I caught a taxi for the 10-minute drive to my AirBnB, which was in the Flaminio quarter next to the east bank of the Tiber. My hosts were an energetic, charming young couple and the apartment was very chic. It was a basement apartment with a window which opened up to a charming little courtyard.

After getting settled in, I was hungry to explore. And just hungry, in general. So I made my way to the front door. On my way out, a guy around my age held the door for me. “Thanks,” I said. “Are you an American?” he asked, with no hint of an accent. I learned that his name was Andrew, and he was a really friendly, down-to-earth American teacher who’d lived abroad for the past several years. His apartment was on the 2nd floor of the building. We made arrangements to grab aperitivo with some of his friends later.

I wandered south. First, I came across the Piazza del Popolo, which was pretty stunning. I took a detour to walk through the Borghese Gardens. Eventually, I found my way to the Spanish Steps. One of my goals was to get a picture sitting on them, because it was illegal as of recently. I stood around for awhile, scoping out the police on duty. There were only two of them, and there were so many people milling around that I realized it would be pretty trivial. There was supposed to be a steep fine for sitting, but the reality was that they weren’t enforcing it. I found a nice couple to take my photo. We made sure nobody was watching, I sat down, we got the photo, nobody was the wiser. The perfect crime.

It was getting to be time to meet up with Andrew and his friends, so I headed back. We met at a pizza place in the neighborhood. We ordered a pitcher of beer and shared some delicious Italian flatbread pizza. All of his friends were teachers at the same school and really friendly. I met AnneSophie, Matthew, and Holly. They were a multinational bunch; from Germany, Britain (if I recall correctly), and Scotland, respectively.

I got up early for the tour of the Colloseum I’d booked a few days earlier. Still jetlagged out of my mind, I made some toast and ran out the door. I followed the Tiber south. It was a beautiful morning, the air fresh (as well as all the new sights and sounds). I made note of places to explore later en route to the Colloseum, stopping at one point to take some photos of the Trevi Fountain.

The Colloseum was awesome. You don’t fully appreciate the scale of it until you walk inside.

I ended up walking almost 18 miles this day. I arrived back at my AirBnB footsore and exhausted, but satisfied.

This post is a work in progress. Chipping away at it when I get a chance

Week 4. Overall, I feel like I’ve gotten into the rhythm of this new way of life. Friends have been setting up more and more video calls in the evenings, whi...