I just completed some backend work to fully migrate this site to AWS. I had it fronted by CloudFlare previously. They were great, I just wanted to consolidate resources and build a foundation that I could potentially add automation to, for subdomains and side projects. While doing this migration, I realized I hadn’t updated the content in awhile. So here we are.

Reading some of my last posts, I’m reminded of how those early days of COVID felt. Yes, things were scary and uncertain, but in some ways, it also felt like a snow day; There was a novelty to quarantine, working from home was a welcome break from the office, there were funny quarantine memes we all passed around, and we all had some sense that the worst would be over in a few weeks. It was spring and it gave us an excuse to hang out with friends outdoors more, anyway.

Two years into this, things feel pretty bleak. We had a brief respite last summer when a lot of us got vaccinated, but the Delta variant pretty swiftly rained on that parade. As I write this, we’re in the worst days of the Omicron wave. My friends who are teachers, nurses, and parents are all burned out. The biggest loss as of late is the light at the end of the tunnel; it’s really not clear when we’ll be through the pandemic, or what “normal” will even look like or mean when the dust settles. What’s become increasingly clear is that it’s going to be a long and winding road to endemicity.

On top of that, there are all of the other, intertwined global crises. Snarled supply chains. Labor shortages. Political polarization in the states that’s so bad that there are widespread concerns about the sustainability of American democracy. We’re experiencing the worst crime wave since the 80s. Climatological catastrophes; in the Pacific Northwest, we’ve had some awful fires, an ice storm that left some in Portland without power for 10 days, and a record-smashing heat wave. Geopolitical tensions. Several of these are part of larger trends that were in play before the pandemic, and COVID has served as an accelerant.

There are decades where nothing happens; and there are weeks where decades happen.

That all being said, I’m doing okay. Really. 2021 was a year of ups and downs, but it was good, overall. I’m grateful that the vaccines were created and distributed so quickly. There was never any guarantee they’d be effective, let alone to the degree they’ve proven to be. I’m grateful to have been able to spend more time with friends and family post-vaccination, after a pretty isolating 2020. I’m lucky–my day-to-day work was largely unchanged aside from transitioning to working from home, but I also tend to be pretty regimented, and having a regular sleep/work/exercise schedule has helped keep me sane even when the world gets chaotic. I may not be able to control the world, but I can control whether I go on a run today and make my bed.

If you haven’t watched it, I highly recommend this YouTube video called Spaceship You by CGP Grey. The ideas presented have been my modus operandi these past two years.

In March, I got promoted to senior engineer at VEVO. I’m going on my fifth year here and still love it. I’m perpetually grateful for good-natured coworkers and challenging problems to solve. We’re currently in the midst of a massive rearchitecture of the publishing pipeline in Kafka. 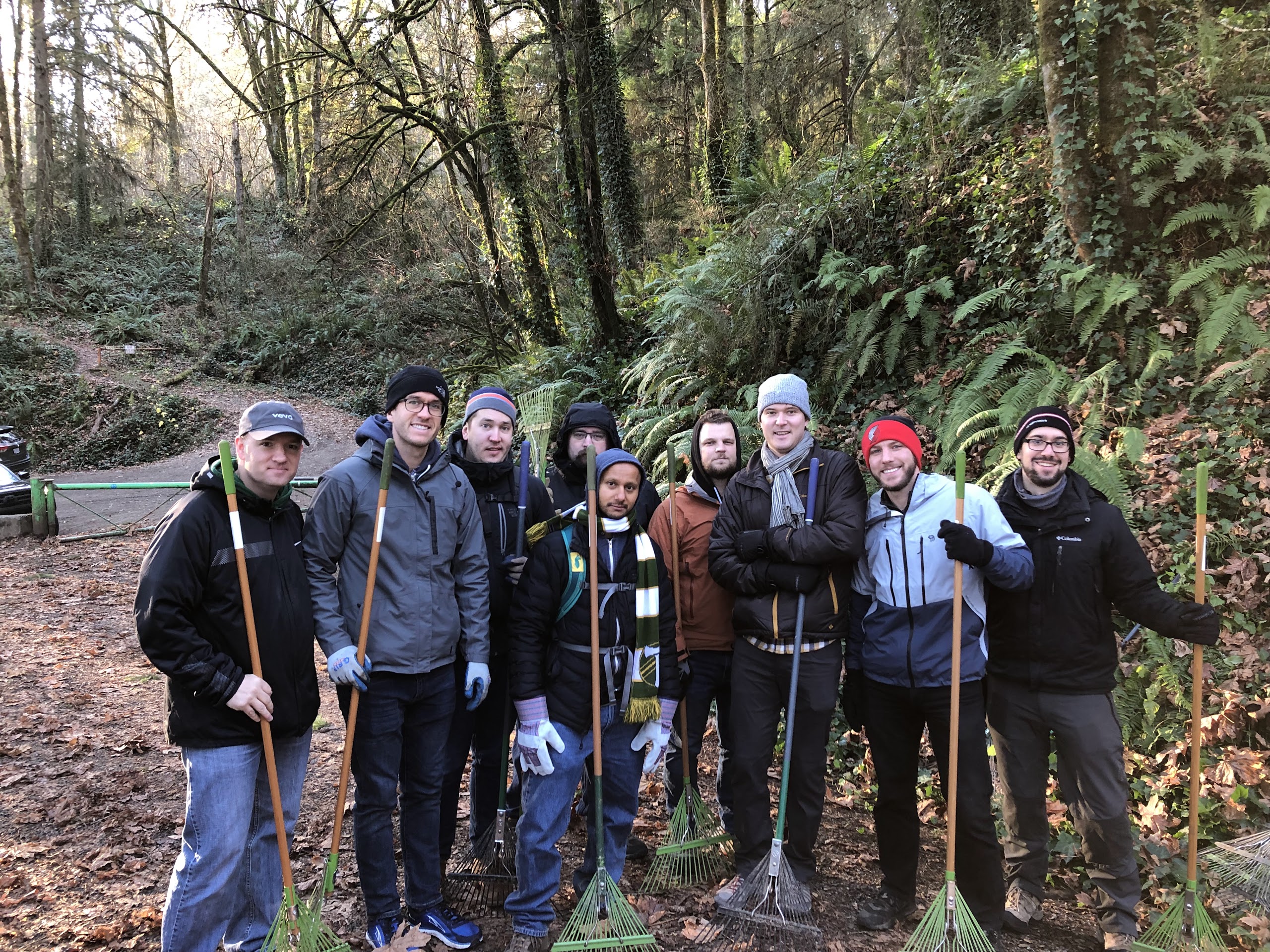 In May, my sister moved to Portland. It’s been a lot of fun living in the same city again. We usually trade off hosting dinner every other week or so. 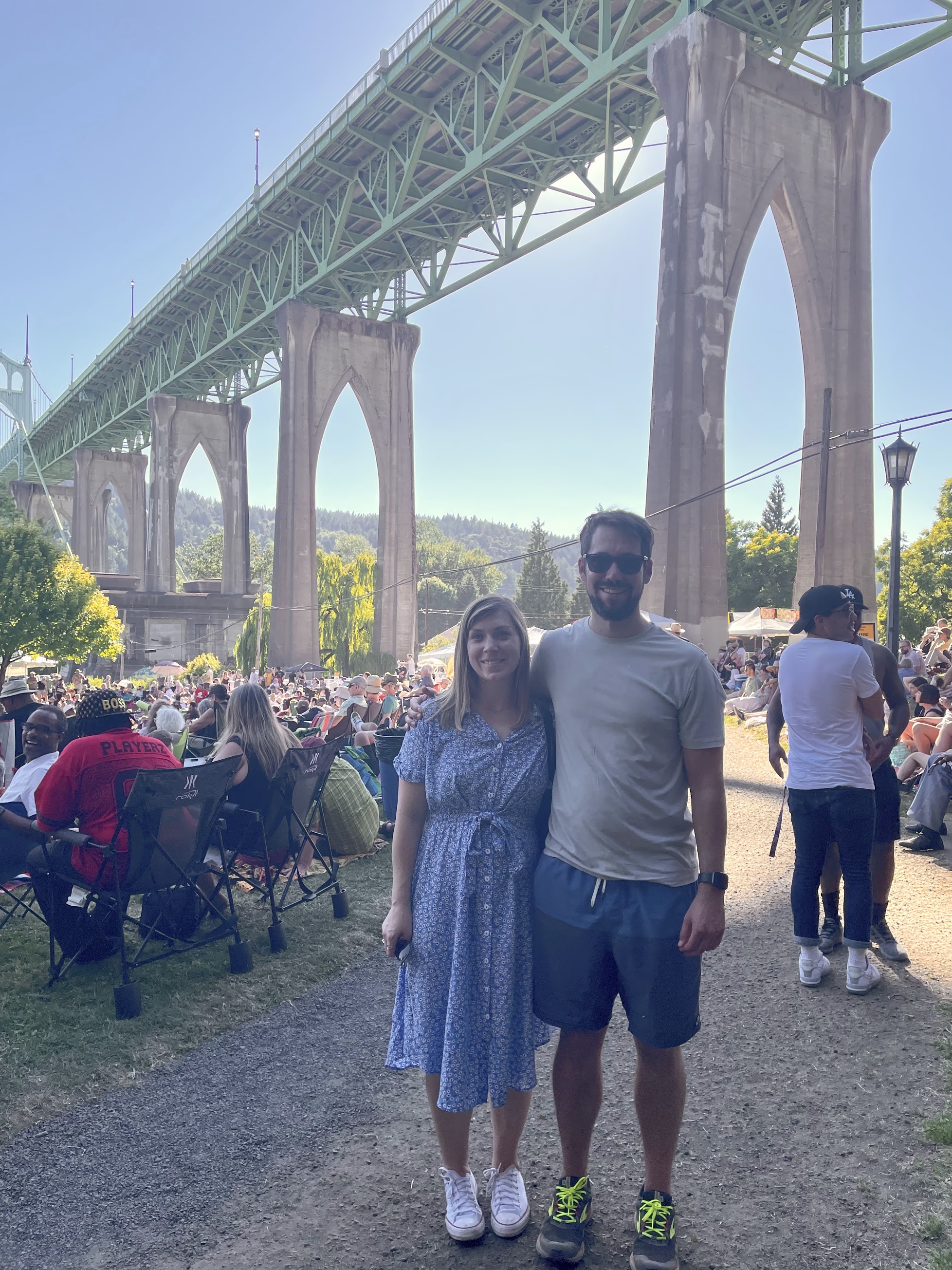 In August, I moved out of my small studio apartment in the Pearl into a four-bedroom house in the suburbs. It was a big change, and took a few months just to furnish it, but it was most definitely a welcome upgrade. My favorite aspects have been having a dedicated office that I can physically leave at the end of the workday, and having a gym. I’ve done a few smarthome projects on it already; will write another post about those. The one downside is that I’ve had to get used to driving more to meet up with friends, but I really don’t mind it. More time for podcasts. 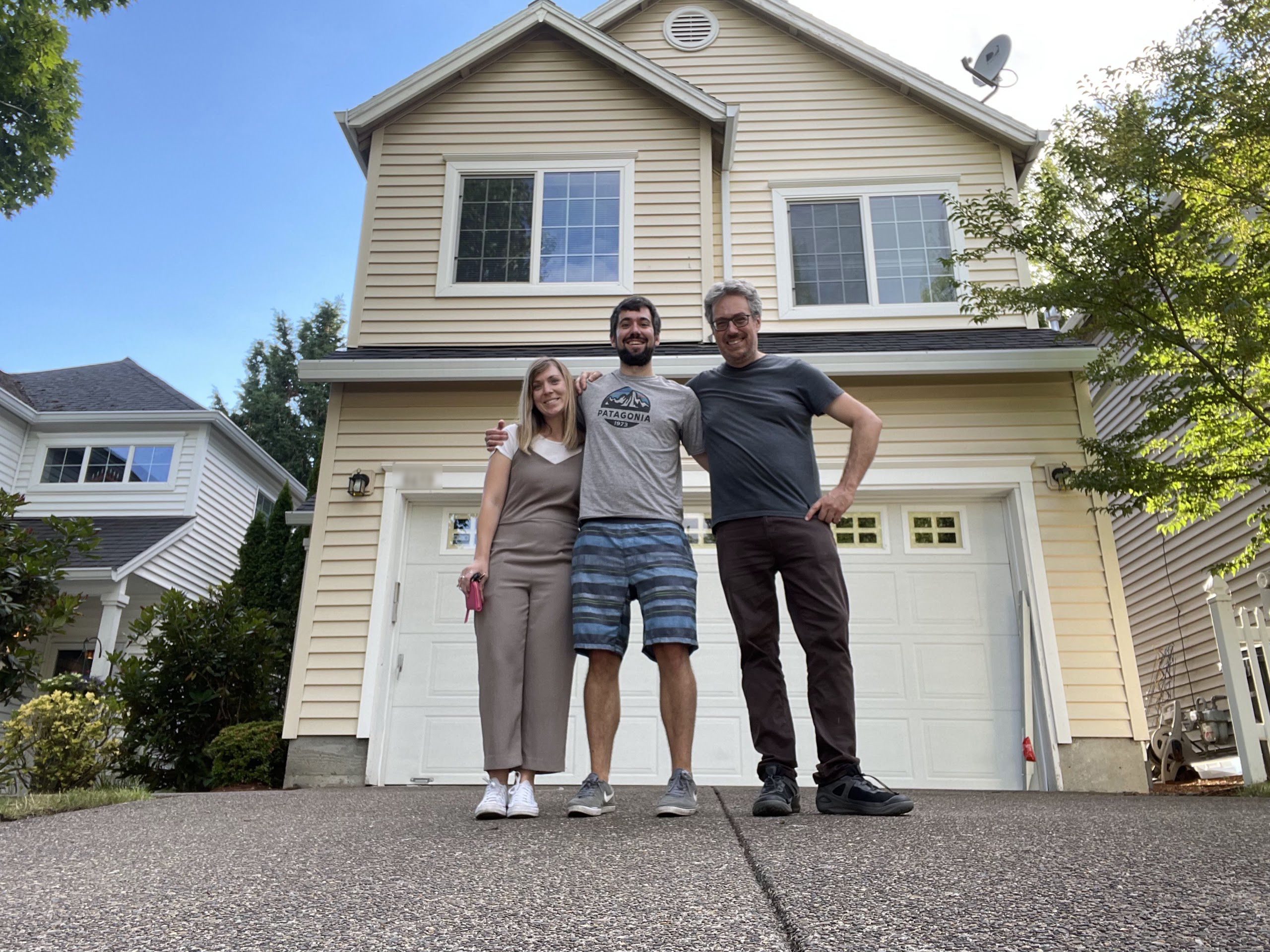 In October, I bought a gravel bike (basically a more rugged road bike) and did a bike trip with my dad in the San Juan Islands. He retired earlier this year, and it’s been great to spend more time together.

I’m a numbers guy, what can I say.

According to my Apple Health data, I: 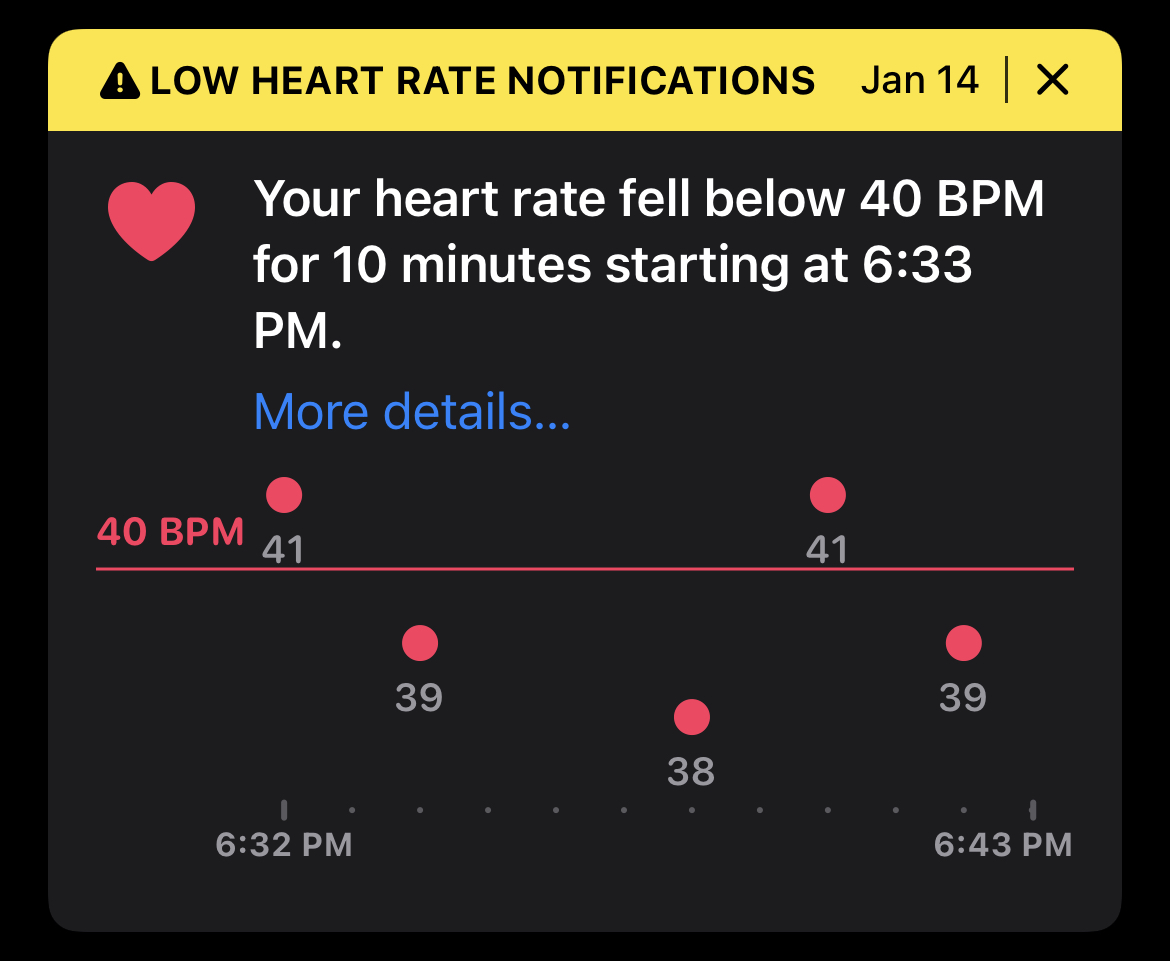 I did a ton of reading this year, totalling 40 books and 11,642 pages. That’s an average of about 32 pages per day. The longest book was Douglas Hofstadter’s “Gödel, Escher, Bach”, at 777 pages, and the shortest was Carlo Rovelli’s “Seven Brief Lessons on Physics,” at 96 pages. “Gödel, Escher, Bach” was a new year’s resolution to read, and it was mind-bendingly good. It completely changed my perspective on what intelligence and consciousness mean, and will most certainly be one that I re-read multiple times over the course of my life.

I also listened to 16,878 minutes of Audible books. Yes, that’s 281 hours. I usually have an audiobook going during a run/cooking/doing dishes/driving/getting ready in the morning/etc, so it’s easy to crank through a bunch of them. 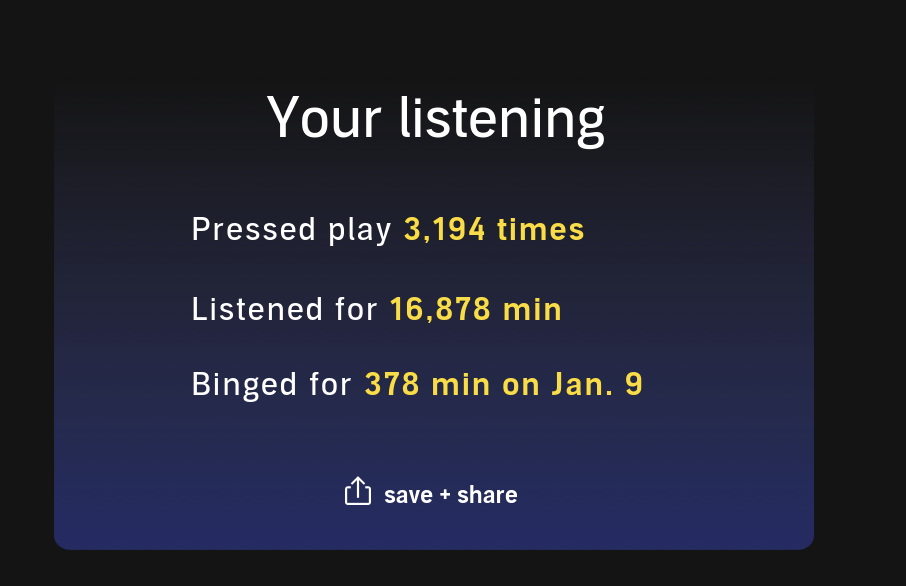 I’ve been meaning to play around with Spotify’s podcasts API, but at the moment, alas, I don’t have numbers on these. But I bet I’ve listened to at least 200 hours of podcasts this last year.

I’ve continued to enjoy Skeptic’s Guide to the Universe (have been listening to them for 10+ years) and Marketplace for news. A new podcast I’ve really enjoyed has been The Michael Shermer Show.

A few other favorites:

I do most of my gaming on PS4, and Sony just published their 2021 Wrap-Up. I played for 111 hours total across 16 games. Which seems about right. Lately I tend to play in a pretty bursty fashion, taking on two or three shorter games and beating them in a couple weekends, then not playing for a month or two. 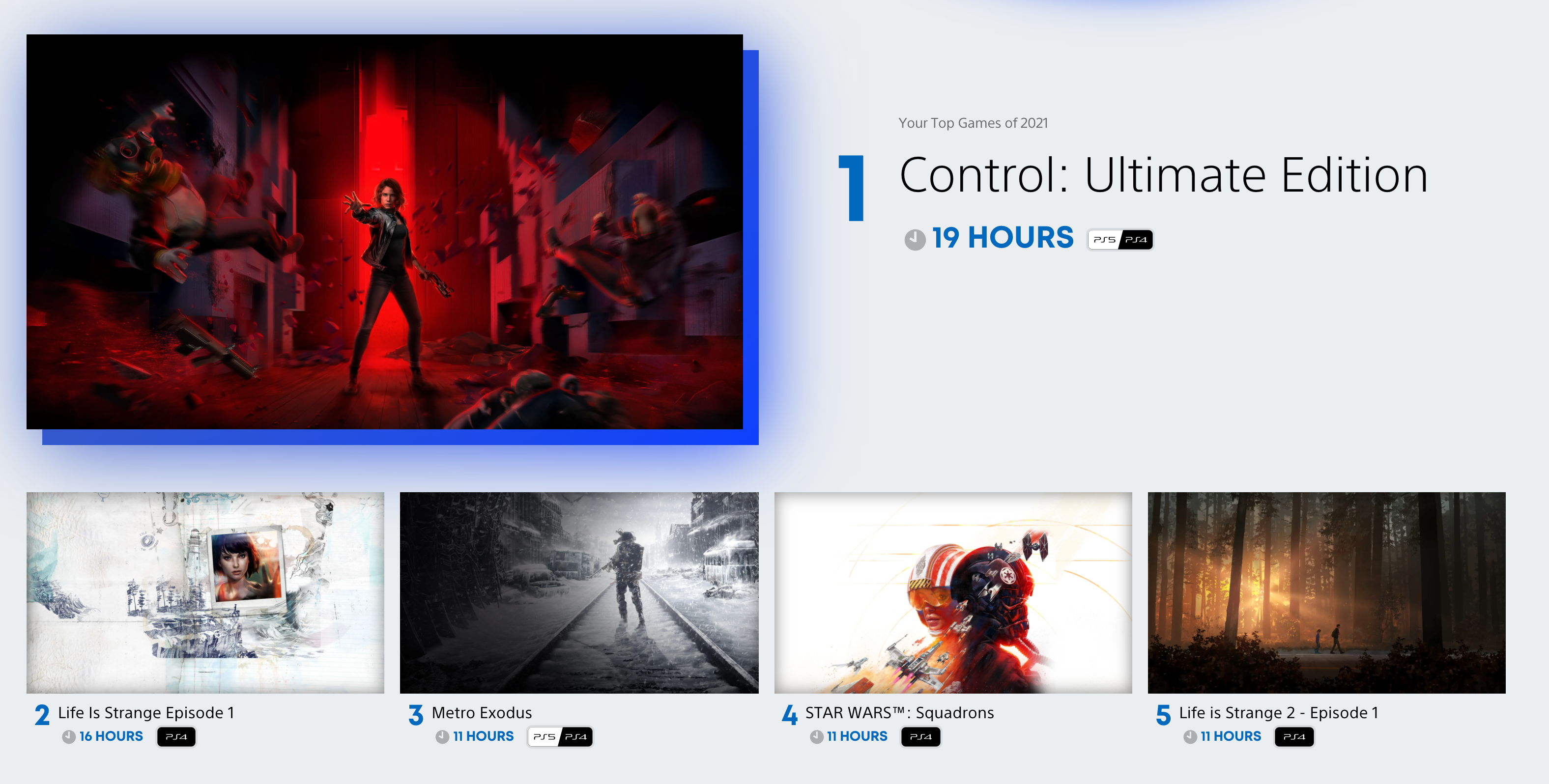 Posting this a few months late, but wanted to share a few photos and stories from a bike trip my dad and I took in October in the San Juan Islands.