I’m an Apple fanboy, but Google Photos is my primary service for organizing photos. I love that it supports group albums that others can contribute to, and it has some slick features like rotating photos in batch when it detects they’re askew.

That being said, it’s not without its shortcomings. One of which is searching in the web UI, which is what I mainly use.

I’m a huge fan of The Last of Us, and have been digging the HBO adaptation, so I’ll use characters from it for my examples.

Let’s say I want to find photos of Joel and Ellie.

No such option in the UI, just this open-ended search bar.

After a bit of experimentation, however, I discovered that you can do these searches in the web UI with boolean operators.

Searching for "Joel Miller" AND "Ellie Williams" results in photos with both of them (note that you need both people’s names in quotes).

Searching for photos of "Joel Miller" OR "Ellie Williams" results in photos that feature either or both of them.

Note that you can chain these as much as you want. i.e. "Joel Miller" AND "Ellie Williams" AND "Tess Servopoulos".

This doesn’t totally have parity with the mobile app; there doesn’t seem to be a query that gives me photos with only us in it in the way that the mobile app does. But it gets us most of the way there. I do hope they ultimately bring the web UI more into parity with mobile, since web is mainly what I use.

Note: This is a short list for now. I’ll update it as I find other hidden search parameters. Leave a comment if you know of any and I’ll add them!

This searches only for photos of me which are selfies:

And this search excludes photos which are selfies: 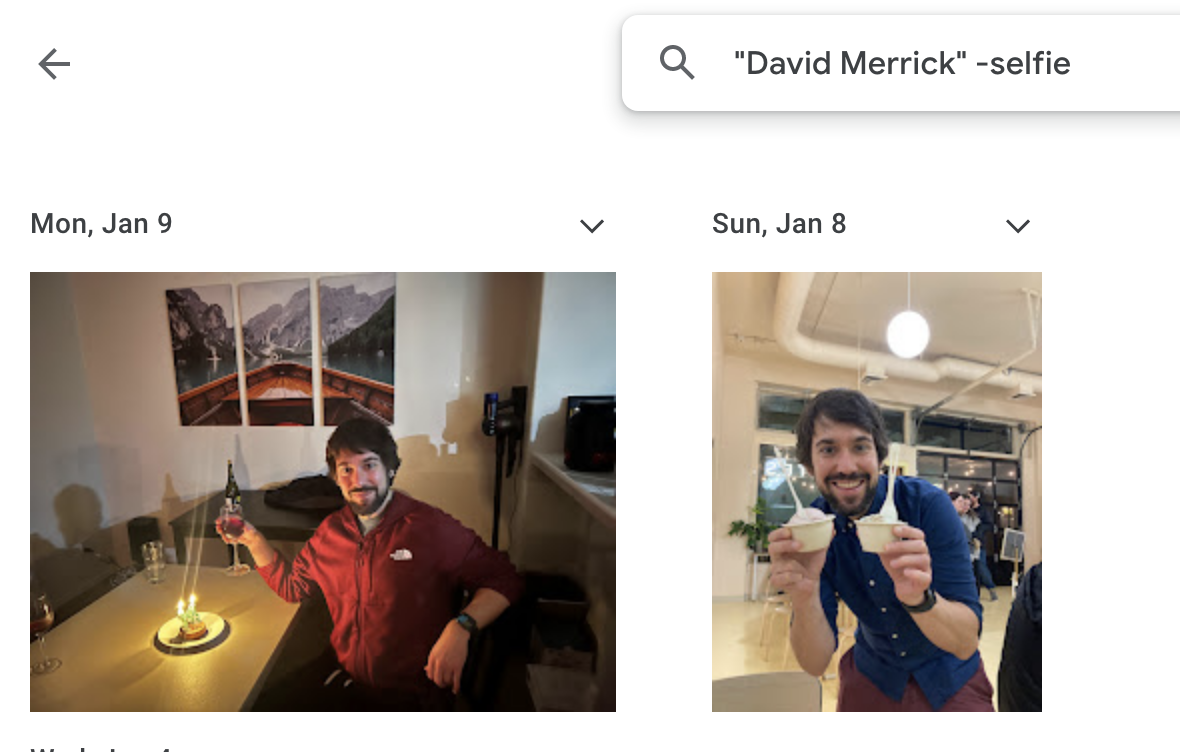 Find photos which are not in any albums?

This has been a long-requested feature that has unfortunately not been implemented at the time of this writing.

I think it would be immensely useful to be able to search, for example, of old family photos which are not in any of my family albums yet.

A clever engineer wrote this tool for hitting the Google Photos API directly. I may start using this for my more advanced search needs. For example, it can iterate over all your photos and find ones that aren’t in any albums.